Here's the next round of 25mm generic, Pandemic inspired minis. These are really too small for me to pull out good details on, so I'm trying out some tricks and techniques, and most importantly missing a painted template to copy colors from. Hazmat guy was my big practice mini here. Yellow is hard to cover with historically, and this yellow came out darker than I intended (it was on top of white primer with a light nuln oil wash) but at least the coverage is there! This was also my first attempt at wet blending on his face shield. The 2 colors are almost the same - sky blue and then sky blue with a hint of white - but the top of the visor is just perceptively lighter if you know where to look.

There's 11 more of thse guys from the pack, so I'll pick another 3 or 4 and noodle around with them for next time.


Heath and Aaron and Eric and Spencer Oh My!

Round 2 of 3D Printed Commercial Walking Dead minis. This time there was more gluing, especially when it came to Spencer's arms. I also stuck to contrast paints and washes this time around, as I haven't been doing well with properly thinning my paints. The contrast & wash route is a good alternate for when my "proper" painting skills are lacking. Overall, I think this batch is perfectly average. Nothing exceptional, nothing horrible.

Heath's skin was a little bit of an experiment. "Black" (or whatever is politically correct these days) skin is never something I'm very good at. I'm not good at most variations of "White" either. As I was using contrast paints for skin this time around thanks to some Facebook painting group tips, I used one of the brown variations on Heath and got a very light tone. Maybe too light, but I think it works. It works well enough I don't want to overdo it and mess it up.

Aaron managed a weird green splotch on his shirt, which I didn't notice until I was taking pics. Ok, that might count as my big negative for the batch.

Next will likely be another long lull in updates. The 4Ground Mall has roof sections lined up to complete, as I've not done anything with the mall in months. I'm also prepping the other half of the no particular game wee lil' 25mm minis. There's 14 random minis left in the pack to prime and eventually paint. I have no idea when the painting mood will strike, but when it does these will be ready. I just hope they're sculpts I'm in the mood to paint.

My new route of working slowly on a mini, one at a time instead of all the colors of a batch at once, has leant itself toward not much content worthy of a post very often. Part of that is because I still wait until 3 or 4 are finished before I spray the final coat of sealant.

This batch of minis is the first of the Walking Dead since they switched to (I think) 3D printed + some assembly required. I'm not sure what I think about the new minis. I can play around with the poses a little. I can hold off gluing pieces until taking care of hard to reach places. One of the reasons I switched to painting minis instead of just old fashioned models was to skip the building process, as the building process used to be "tear off sprue and glue" but has transformed into "snip carefully, sand mold lines, fill seams with putty, sand seams" and then add too much glue. It's different. And I'm old, so how things used to be was good enough!

Old man griping aside, these minis were pretty good to put together and paint. It feels like taking my time and working on just 1 is paying off with better results.

Lots of puttering around since my last post. While I was mostly working on each of these one at a time, I would mess up something on one and decide to make progress on another. It ended up the bases were all ready for whatever I was going to wrap things up with around the same time, thus making it look like once again I was working on a batch of 6 minis at the same time - for the past month.

These are also from the Studio Miniatures order that Chuck came from. My new thing to try this time - 5 o'clock shadows. Overall they turned out better than I expected but not as good as I had hoped. For my first time trying it out, I'd say it's acceptable.

My major screw up came in with my John Wick skin color. Somehow I added a shade or wash along the way that turned him overly orange. I didn't want to start over so I tried to save what I had, but he still is more on the orange side of the spectrum than I'd like. Roddy's blue shirt that he ended up with is the 3rd attempt/coat for trying to do a plaid pattern. On attempt 1 my lines were too thick. On attempt 2 lines bled into each other and weren't lines at all. Attempt 3 isn't as crisp as I would have liked, but from 6 ft away it looks ok. I should have taken the picture from 6 ft away... 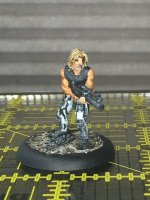 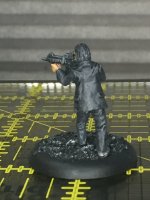 I have a list of structures to work on, along with some old fashioned plastic models. I have no idea who the next batch of figures will end up being for those times I get the urge to work on something for 10 min. So many options to prep for when the mood strikes!

Today's update is another bit of a change from normal posts. Instead of a whole batch of minis showing up painted, there's one. The Not Chuck Norris from Studio Miniatures. While I had primed a batch of minis when working on the last mall update, I decided it was time to focus on just 1 mini instead of cranking out a batch since I haven't been overly pleased with my last few painting attempts. Chuck made it to the front to get painted, mainly because there weren't any hard to reach spots on the mini, and thanks to the painted pic on the Studio Miniatures site I wouldn't have to pick colors myself.

Using the reference pic worked well. Granted, my paint job isn't nearly as good as what the pros make (my pockets lack stitching) but looking at my version next to the pro version... not bad.

As always, correct spelling is optional in any blog entry. Keep in mind that any links more than a year old may not be active, especially the ones pointing back to Russellmania (I like to move things around!).

Tags have been added to posts back to 2005. There may be an occasional old blog that gets added to the tag list, but in reality what could be noteworthy from that far back?